In this article, you will learn about the Top 10 Tyre Companies in India and also what kind of tyres they manufacture and for which vehicles. 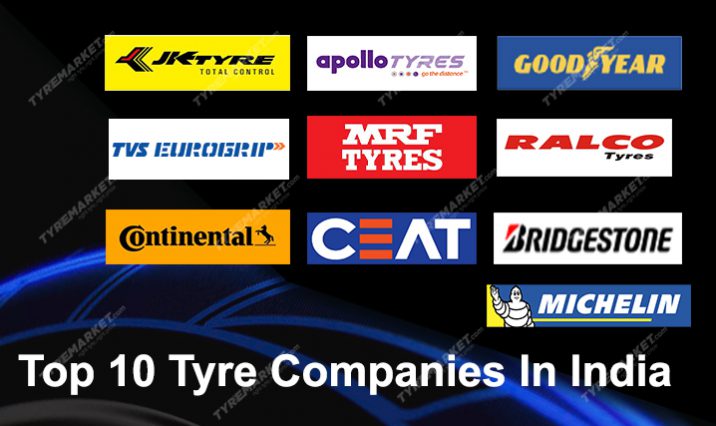 Even in these less than ideal times that we’re facing, it’s interesting to see how big the Indian tyre industry is. Take April – December 2019, and the number of tyres manufactured was staggering 13.65 crores. Considering that a year ago during the same period, the industry churned out 14.63 crore tyres shall give you a stronger idea. The major chunk of the tyres that are produced and sold in India are for motorcycles, followed by scooters, passenger vehicles, three-wheelers, LCVs, and trucks and buses. Let’s take a look at the various tyre companies operating in the Indian market.

If you’re looking for the largest manufacturer of tyres in the country, then it’s MRF — short for Madras Rubber Factory. What started as a balloon factory in Chennai in the mid-1940s, MRF has certainly come a long way. The brand isn’t just known in the domestic market but also internationally — with presence in 65 countries.

In India, MRF handles manufacturing at eight different plants: Goa, Ankenpally, Medak, Arkonam, Trichy, Tiruvottiyur, Kottayam, Puducherry, and Tiruchirapalli. In terms of the portfolio, MRF makes and sells tyres not just for passenger cars and motorcycles, but also for trucks and buses, farm machinery, OTR vehicles, LCV and SCV,  Pickup, 3-Wheeler, etc. It’s popularly seen as a brand with a wide variety of tyres on offer. The current range comprises everything from entry-level ones to high-performance and luxury-car radials. MRF has also been commissioned to make vehicle-specific tyres in the past, and while not a lot of brands can handle that, MRF has consistently delivered.

The brand is currently number 1 in overall sales, but in the domestic car market, it’s pipped to second by Apollo. As a replacement tyre brand, it’s still ahead. Further cementing its position are the sales figures from 2018 – 19: the company recorded overall sales of Rs 15,837 crore, making an overall profit of Rs 1096.87 crore (after taxation).

If you look at the 2018 – 2019 data, Apollo has been the most solid performer in the OE segment, in addition to its supreme performance in the CV sector. It means Apollo sells the largest quantity of tyres in the country as original fitment on new vehicles in almost all categories. Headquartered in Gurgaon

Apollo Tyres came into being in 1972, and since then has consistently worked towards a numero uno position. And by the looks of it, it’s not too far behind in the race.

It has a presence in over 100 countries and has manufacturing facilities across India (Chennai, Perambra, Limbda, Kalamassery), Hungary, and the Netherlands. It also has an overseas office in Amsterdam, along with global R&D centres in India and Europe.

The company produces tyres for all kinds of vehicles, under the banners Apollo, Vredestein, Kaizen and Regal. While the latter two focus on commercial vehicles (region-specific), Apollo has a wide variety of products: two-wheelers, passenger vehicles, commercial vehicles, off-road vehicles, etc. Apollo’s range is budget-orientated but like MRF, it does offer some high-performance and luxury radials as well.

Bridgestone has been in the Indian market since 1996 and is thus a well-known brand. But while its range isn’t as wide as some of the others, the brand has certainly a great following in the Indian market. That’s down to the quality of tyres, and the overall brand positioning after all these years.

In the Indian market, Bridgestone sells passenger car and SUV tyres while under the Bridgestone Commercial banner, it sells tyres for trucks and buses as well. But that’s not where Bridgestone stops, it’s also looking at selling smart tyre solutions. These are going to be particularly helpful for fleet operators. Using a strain sensor, they’d be able to remotely check various aspects of the tyre: air pressure, load, and wear. Bridgestone has close to 3000 dealers spread across India and currently produces its passenger tyres at two facilities: Pithampur and Chakan. It has a presence in both the OE sector as well as the aftermarket sector.

The current range has widened to accommodate more budget options but on the whole, you get a selection of world-class value tyres at fairly decent prices.

The Indian arm of the company is now under its EMEA business unit, and it was just last year when an expansion budget of Rs 350 crore was announced. This was done to ramp up the passenger-car-tyre production to 20,000 units a day.

Unlike what its popularity might suggest, CEAT is not a brand that was born in India. But over the years, it has perfected the value segment and also its offerings. It’s a part of RPG Group, which was established in India in the year 1979. CEAT has been around since 1958 and currently offers a range of tyres for passenger vehicles, two-wheelers, SUVs and pickups, agriculture, earth-movers/construction and commercial vehicles.

Currently, the company produces more than 15 million tyres a year. CEAT has a presence globally in about 130 countries and has its headquarters in Mumbai. In India, its tyres are produced at various plants in Ambernath, Halol, Bhandup, Nagpur, Chennai, and Nashik. The company has more than 4500 dealers across the country. And it’s a fairly common brand in the OE segment.

Goodyear might not be an Indian brand but it’s a household name now. It’s been in the country since the early 1960s and that in itself speaks a lot about the commitment it has towards the Indian market.Globally, it has a wide presence and manufacturing facilities in 21 countries. Locally, Goodyear India manufactures at two of its plants: one in Aurangabad and another in Ballabgarh.

The range includes tyres for passenger cars as well as the farm segment. Goodyear is used as both OE and replacement tyres. The product portfolio for the Indian market includes some value offerings, high-performance radials, and rugged, off-road-ready tyres. Since it’s been around for this long, Goodyear India also understands what the Indian customer wants — and delivers accordingly.

TVS Srichakra/TVS Tyres was launched in the year 1982 has rebranded its entire range in favour of the new TVS Eurogrip brand. The company currently has about 3000 dealers across India, and exports to more than 70 countries. It handles production at two manufacturing facilities in India

One in Madurai (Tamil Nadu) and the other in Rudrapur (Uttarakhand). TVS has a decent presence in both OEM and aftermarket segments in the market. The current range of products includes two- and three-wheeler tyres, farm and implement tyres, and other specialist-use tyres like industrial pneumatic, skid-steer, multi-purpose, and floatation tyres. The TVS Eurogrip specialises in motorcycle tyres and includes everything from commuter tyres to off-road and high-performance ones.

One of the more prominent names when it comes to Indian motorsports, along with MRF, is JK Tyre. The company has a global presence (in 100 countries), both EM and aftermarket sections, and has a total of 12 manufacturing facilities around the globe. Nine of these are in India while the rest three are in Mexico.

There are three plants in Mysore, one in Banmore, one in Kankroli, another in Chennai, and three more in Haridwar. Backed by 4000 dealers and 500 individual brand shops, JK Tyre seems to be in total control – much like how its tagline suggests. And it doesn’t just cover the entire country physically but also has a presence in almost all market segments as well. JK offers passenger car tyres, motorcycle/scooter tyres, commercial tyres, farm tyres, off-road tyres, three-wheeler tyres, and also retread.

JK Tyre launched its first radial in the year 1977, quite a big feat, considering that wasn’t exactly common back then. Currently, the development is supported by the Raghupati Singhania Center of Excellence, Mysore, Karnataka. The range is mainly leant towards the value segment, but there are ones for premium cars as well. And JK also has its very own Smart Tyre that comes equipped with sensors that let you monitor the tyre’s health in real-time.

Ralco isn’t as common a name as others here, because its parent company Ralson focussed solely on bicycle tyres until the turn of the millennium. Which is when it entered the two- and three-wheeler space under the name Ralco. Going forward in the early 2010s, the company announced its plans to enter the farm equipment and light commercial vehicle space as well.

Now, after enjoying its position as one of the most successful bicycle tyre brand and a steadily increasing annual growth, Ralco has announced to enter the heavy commercial vehicle segment as well. And that’s not all, Ralco is an original tyre supplier to a variety of EV brands as well.

Ralson has been around since 1974 and it’s safe to say they know a fair deal about making tyres. Ralco, on the other hand, might be newer but it’s been around in the space for almost 20 years. It has close to 5000 dealers and manufactures tyres at its two plants in Ludhiana, Punjab. For the new heavy commercial vehicle project, the company is setting up a new facility in Indore, Madhya Pradesh.

In 2018 – 19, Ralco’s annual turnover touched Rs 800 crore. Ralco has been fairly strong in the OE market, with popular cars like the Renault Triber and Hyundai Venue being offered with Ralco radials.

Continental is a Germany-based tyremaker, usually present on a variety of cars in India. The company was set up in 1871 and since then has relentlessly produced high-quality tyres. In India, Continental has its plant in Modipuram. Been around for 50 years, the automotive technology company Continental (of which the tyre division is a part) announced a large investment in 2018, to increase its capacity in India.

Globally Continental Tires are available across 12 countries, with 13 plants (including India), and headquarters in three locations (Hanover, Petaling Jaya, and Fort Mill).

The Indian range of tyres from Continental includes products for hatchbacks and saloons, SUVs, and high-end cars. While Continental Tires doesn’t have a unidirectional or high-performance tyre on offer, the ContiSport is one of the revered ones.

We’ve all seen and adored Bibendum (Michelin’s mascot, the tyre man), but the brand’s products are equally lovely. The headquarters is in France, but its presence isn’t limited to one — Michelin currently serves 171 countries through 5000 of its tyre distribution and service centres. It has 69 R&D centres including one in India.

In the country, the brand sells high-quality tyres for two-wheelers, passenger vehicles, commercial vehicles, and off-road vehicles. It also manufactures tyres for trucks and buses at a production facility in Chennai, while the rest is imported. The Indian office is in Gurgaon. For passenger vehicles, the tyre range has some neat energy-efficient tyres, ride-orientated ones, special off-road-ready products for SUVs, and class-leading high-performance tyres made to satiate the enthusiast’s needs. For two-wheelers, you get road-focussed ones for motorcycles and scooters, off-road-ready tyres, and products for use on high-end motorcycles.