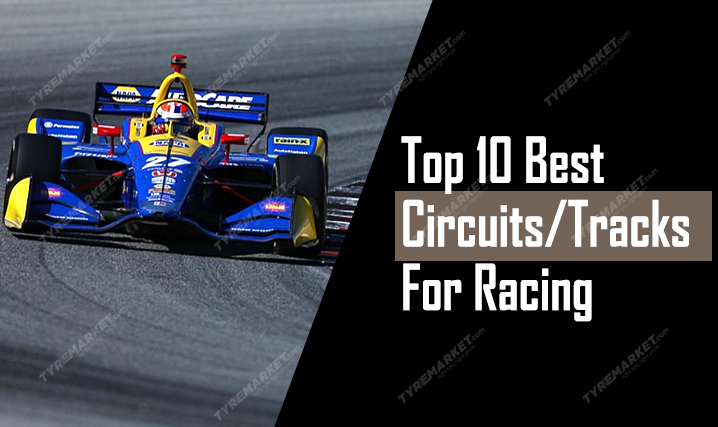 Supercars mowing down the racetrack, racing neck to neck in hot pursuit while the frenzied cheers of the audience rattle through the stadium—race tracks/race circuits are the wild side of sporting action. The thrill of being at a racetrack watching the cars rev and crackle is an exhilarating experience.

Whether you are an ardent racer or a spectator who loves to watch drivers pushing their limits on race tracks, this article will give you information on the top 10 best circuits or racetracks in the world.

Located in the town of Nürburg, Rhineland-Palatinate, Germany, Nürburgring is one of the most demanding racetracks in the world. The race circuit complex can seat 150,000 persons and hosts all the major international racing events. This track has a reputation for being merciless and terrifying among racers for its tricky corners, steep slopes, and treacherous crests. Jackie Stewart, Formula 1 pilot and three-time world champion, named this 20.8-km-long loop as The Green Hell Legend (Grüne Hölle).

Suzuka is a grand race circuit situated in Suzuka City, Mie Prefecture, Japan. The sweeping racetrack with a unique figure-of-eight layout and varied corners hosts Japanese Grand Prix. Suzuka race circuit features 130R, ‘S’ Curves and the Degner Curve (named in the memory of Ernst Degner) has witnessed some incredible motorsport moments. The racing circuit covers incredible corners in a small space and is appreciated by drivers for the challenges it offers.

Also known as Circuit des 24 Heures du Mans, Circuit de la Sarthe is situated in Le Mans, Maine, France. It is a mix of public roads and race track and hosts the world-famous motorsport event, Le Mans. With its iconic corners, Dunlop Curve, the Esses, and the Porsche curves, the semi-permanent racetrack Circuit de la Sarthe tests the driver’s skills to the core. The race circuit is one of the longest racetracks in the world. The race stadium can house over 1,00,000 spectators.

Situated in the mesmerising location, a hill in Bathurst, New South Wales, Australia, Mount Panorama, also known as Bathurst, is arguably one of the greatest racetracks in the world. Mount Panorama is a street track where races are conducted on public roads. The racing circuit is built with an unusual design in compliance with modern standards, with a 174-m (571 ft) vertical difference between its lowest and highest points. The steep inclines, quick corners, and long stretches make it hard and challenging for the racers.

Commonly referred to as Monte Carlo, Circuit de Monaco is a popular street circuit laid around the harbour of the principality of Monaco on the city streets of Monte Carlo and La Condamine. This street circuit remains substantially unchanged since its creation in 1929 and is a notoriously difficult one to master even for seasoned racers as it is surrounded by barriers and fast corners like Piscine mixed in with tight hairpins.

Laguna Seca is a racetrack in central California for both motorcycle and automobile racing. This circuit is laid out around the hillsides in Salinas County on the Monterey Peninsula and is considered one of the US’s best racing tracks. Corkscrew is one of Laguna Seca’s most difficult turns with exacting uphill, blind apex, and a sloppy downhill drop. The circuit currently hosts exciting sports car and motorbike racing.

Silverstone Circuit referred to as Silverstone is a motor racing circuit based off Silverstone, located in both Northamptonshire and Buckinghamshire in England. The grand racetrack is home of British motorsport hosting British Grand Prix since 1950  and featuring some of the best corners in F1 such as Copse and the Maggots/Becketts complex. This old-school racing circuit is one of the most used tracks in the UK as it hosts championships such as FIA WEC and BTCC.

Autódromo José Carlos Pace popularly known as Interlagos located in the city of São Paulo, in the neighbourhood of Interlagos. The circuit is named after Carlos Pace, Brazilian Formula One driver, and has been a regular host for Formula One Brazilian Grand Prix since 1973. Racers will encounter dramatic on-track actions, including quick bends and long straights. Autódromo José Carlos Pace stands testimony to some of the classic moments in F1.