Ad
Tyremantra  ›  Featured  ›  The Future of Tyres is Airless: Here’s Why It Matters-Tyremarket.com 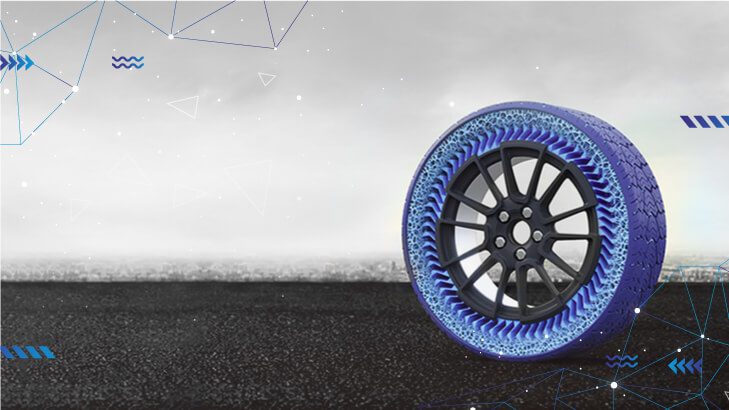 Even though opting for airless tyres is not exactly about re-inventing tyres, it is still no lesser of an of a revolution in itself. Considering the fact that the modern era has been travelling on pneumatic tyres since the late 1800s, it is definitely a major leap in the ever-evolving transportation system. One may consider its origin from the ‘Run Flat Tyres’ which first appeared in the 1980s. The main drive for the ongoing efforts to perfect this technology comes from the advent of riderless vehicles. As our dependence on these vehicles grows so would be the demand for tyres which doesn’t need too much attention.

The other significant reason for many of the top manufacturers to delve into this technology is the unfortunate incidents which tend to occur as a tyre suddenly loses its air pressure or turn flat. According to the National Highway Traffic Safety Administration, 733 people lost their lives due to tyre malfunction in 2016.

Michelin, a leading tyre manufacturer first came up with this new design and called it ‘Tweel’. One can easily note the name is actually a combination of tyre and wheel. It contained polyurethane spokes in the form of uniformly distributed wedges to support the mass of the outer diameter and thus, the entire mass of the vehicle. In fact, it looks like a compact and futuristic cartwheel. Another pioneer in this technology, Bridgestone launched its second-generation non-pneumatic tyres, way back in 2013.

Also Read: 8 Ways To Take Care Of Your Car During The Monsoons

If you have ever experienced the ordeal of having a punctured tyre at a secluded place, you would easily understand the benefit of these puncture-proof tyres. Due to the special materials used in the construction of these non-pneumatic tyres, these are more or less puncture-proof and literally maintenance-free. The fact that these tyres would not blow out would prevent a considerable number of accidents and thus, save lives. Also, due to their heaviness and sturdiness, these tyres would have better traction on the road. That would also help you in handling your vehicle better.

These puncture-proof tyres are quite durable and hence, would last for a long time. That would save you money due to their low replacement frequency. In fact, it would save you a lot of time and hassle too. Just to give you a perspective, Toyo Tire & Rubber Co. Ltd showcased an airless tyre back in September 2017 with enhanced durability of 700%. Won’t you like your vehicles to be shoed by these tyres some day?

In contrast to the conventional tyres, all the material used in the manufacture of these tyres are 100% recyclable. Plus, the low rolling resistance offered by these tyres would result in significantly low carbon emissions. Now, ain’t that great for the environment and hence for the future generations?

Top companies like Michelin, GM etc are brainstorming and collaborating to come up with an improved version of these tyres. They are calling it UPTIS i.e, ‘Unique Puncture-Proof Tire System’ and have drawn plans to with Chevrolet for its real testing by 2024.

For bikers, Bridgestone Corporation and Bridgestone Cycle are collaborating to manufacture airless motorcycle tyres from recyclable resign. It has already developed non-pneumatic production-ready concept scooter tyres too. For the records, Polaris has already come up with WV850 H.O., a nearly indestructible all-terrain vehicle for the US military. The tyres of this impressive vehicle features honeycombed non-pneumatic and bulletproof tyres.

Till now the major issues with non-pneumatic tyres were their lack of speed, heavyweight, and expensiveness. Hankook, the leading South Korean tyre manufacturer claims to have at least solved the speed conundrum. They have been pursuing this concept since 2011 and at their fifth attempt, they came up with ‘iFlex’ a non-pneumatic tyre which can give the conventional tyre a run for its money on not only at the speed front but also in stability and slalom (ability to zigzag).

The iFlex, fitted on an electric vehicle, clocked up to 130 kilometers per hour during the test runs. The company claims that due to the usage of uni-materials during production, the energy efficiency increases significantly. Moreover, streamlining of the production process and reduction of manufacturing stages also reduces the carbon print.

Though airless tyres are still a work in progress and may be utilized to their full potential only by 2024 onward; industries which deal with massive weights can benefit from these tyres immediately. Mining and military would be the prime industries which would be in the radar of these tyre manufacturers. With continuity in research and top-players leading the game, sooner or later even you can expect these airless tyres for your ride. Akin to all developing technologies, it would automatically become inexpensive thus saving you the pinch while opting for these non-pneumatic tyres.

Overall, one can be optimistic and in a way, bet safely that these airless tyres are indeed the future of tyres and would soon be shoeing our vehicles.