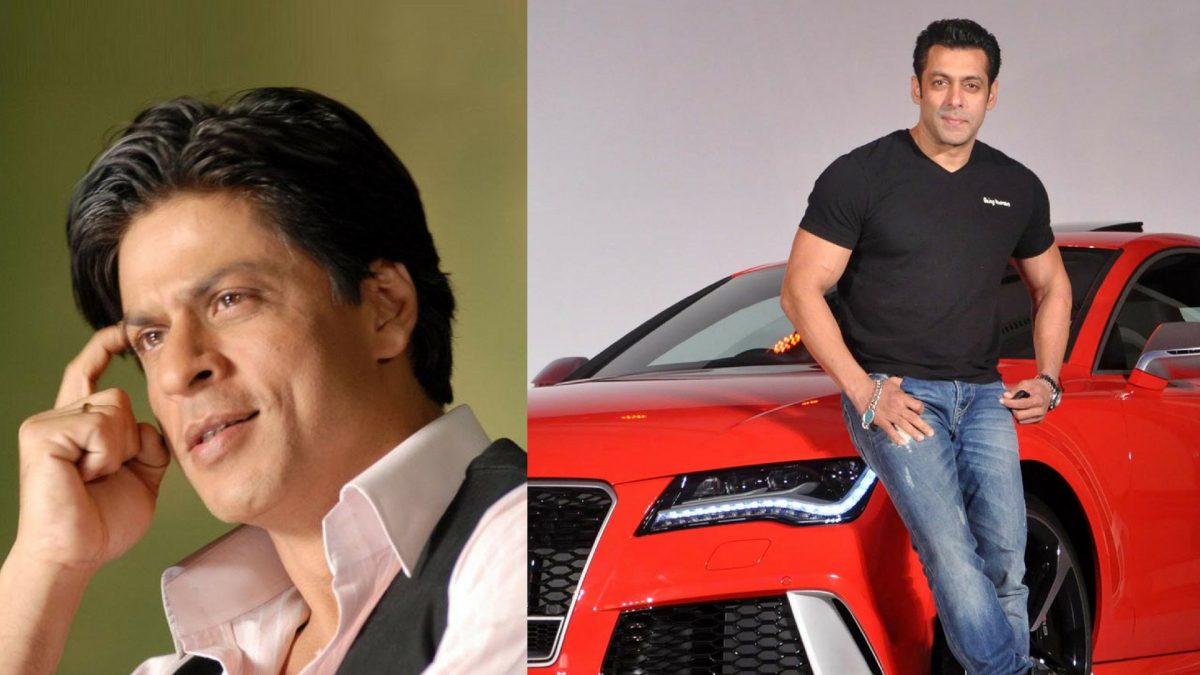 CARS are the best source when it comes to making a style statement. Owning a fabulous four-wheeler that can make people feel envious has now become a status symbol as well as an obsession for the elite class. In India, luxury and sports vehicles are liked by not just the cinema stars but also by the businessmen and the sports persons. Here is the list of some “rich and famous” Indians and the cars they own, HAVE A LOOK! 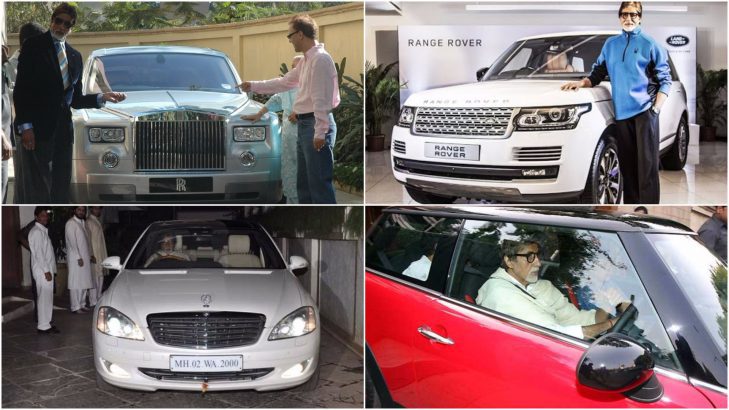 He is the “Angry Young Man” and the true “Shahenshah” of Bollywood for decades. He owns over 15 cars. His fleet of cars ranges from Range Rover, Bentley Continental GT, BMW, Mercedes Benz, Lexus LX470 and much more. A Rolls Royce Phantom was gifted to Sr. Bachchan by his close friend Vidhu Vinod Chopra. Moreover, his son Abhishek Bachchan and Granddaughter Aardahya also gifted him a Mini Cooper S. Furthermore, the actor also recently flaunted Porsche Cayman S. 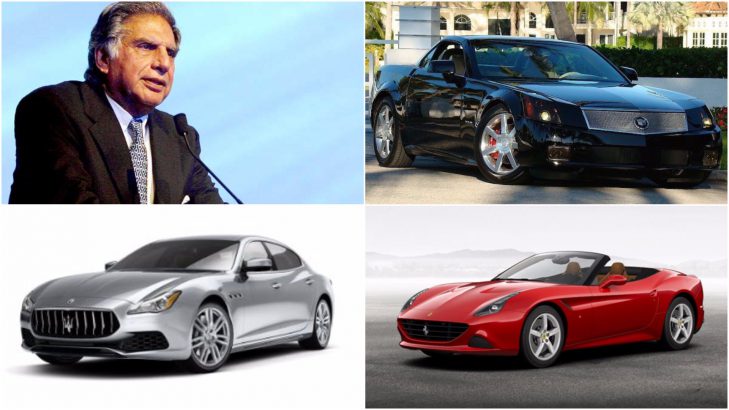 No introduction needed for this man. He is the man who acquired Jaguar in 2008. His love for those mean machines can be guessed by the range of cars he possesses. His long list of four wheelers includes some of the best cars in the world. He owns Chrysler Sebring, Mercedes SL500, Maserati Quattroporte, Cadillac XLR and Ferrari California. 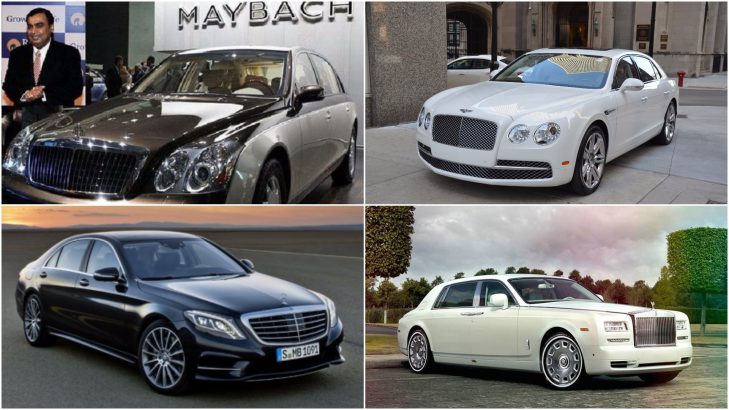 JIO King and the richest man in India, Mr. Ambani owns an array of world’s most expensive cars such as Rolls Royce Phantom, Bentley Flying Spur, Mercedes S Class etc. But the jewel among them is Maybach 62, a Rs. 5 Crore car considered one of the world’s best. 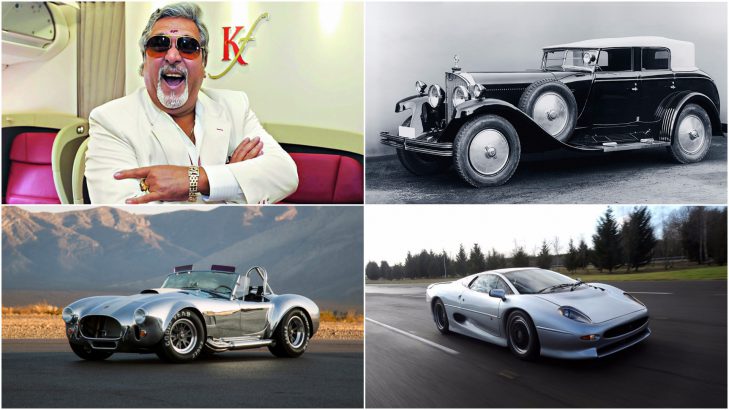 So much of ‘controversy’, ‘Kingfisher calendar girls’, ‘lavishness’ and then all of a sudden he says “Don ko pakadna mushkil hi nahi namumkin hai”. Vijay Mallya, who is now accused of leaving the country and not returning the huge sum of 9000 crores to SBI, once had an amazing collection of cars in his garage. This man has never been short of style statement. The owner of Kingfisher is well-known for his opulent lifestyle. Off-late he may have been in some trouble, but that has not barred him from living his love for cars. Unlike some of his contemporaries, Mr. Mallya has a fixation for “Classic Cars” and before all went messed up with the SBI loan and the run-away thing, he had an amazing collection of cars like a 1926 Mercedes K Type, a 1965 model of Shelby America Cobra 427, a 1994 version of Jaguar XJ 220 and 1925 Sunbeam in his garage. Well as they say he really is the “King of Good Times”, but Mallya Sir, how about paisa? 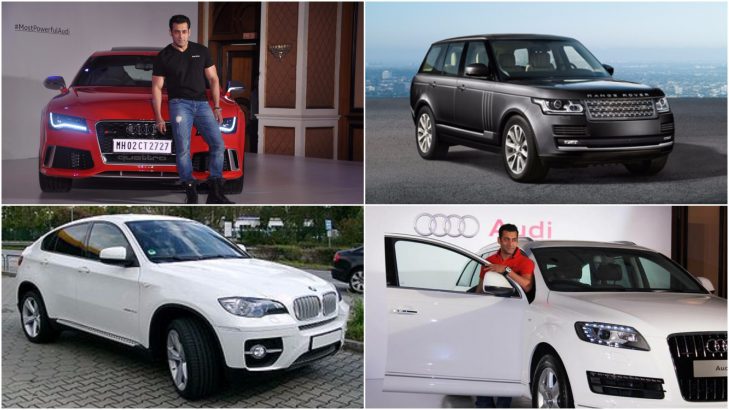 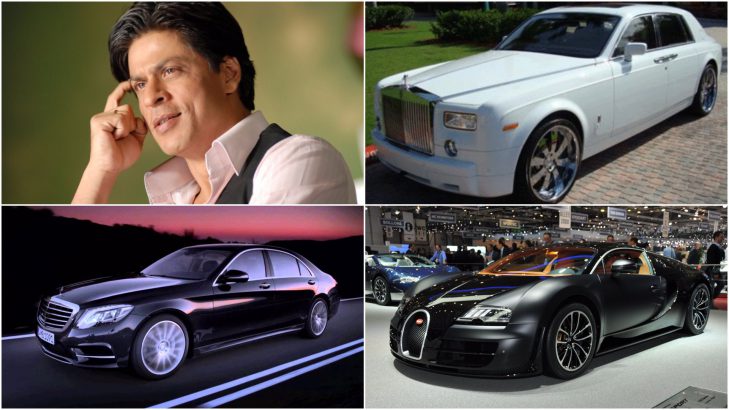 Ladies’ heartthrob has his heart set on luxurious cars. He is a proud owner of BMW Convertible, Rolls Royce Phantom, Land Cruiser and Mitsubishi Pajero. The superstar is also reported to own a ‘Bomb-proof’ customized model of Mercedes S-class.  And his latest obsession is world’s fastest car, Bugatti Veyron, worth Rs. 12 Crore only… Now we know why he is called as “King Khan”! 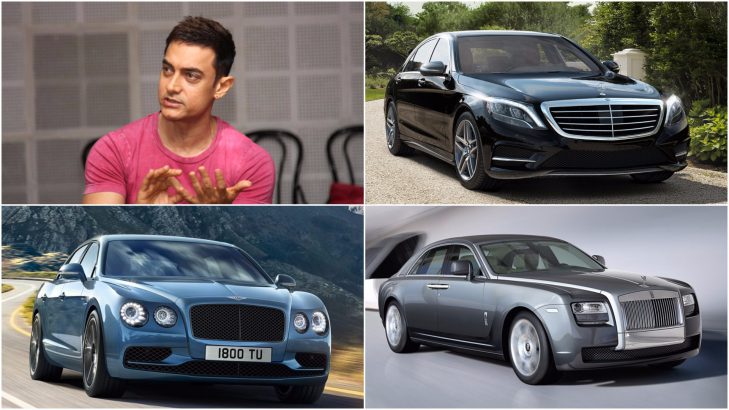 Mr. Perfectionist owns a luxurious Merc S600, which is also a customized ‘Bomb-proof’ car, costing him around Rs. 10 crores. Due to the threats received after the launch of Satyamev Jayate Show, Merc S600 was the safest option for Aamir.  He was the third person after Ex-PM of India Manmohan Singh and business tycoon Mukesh Ambani to own a ‘Boom-proof’ Mercedes-Benz S600. His list of cars also includes Rolls Royce Phantom, Bentley Continental and Land Rover Range Rover. 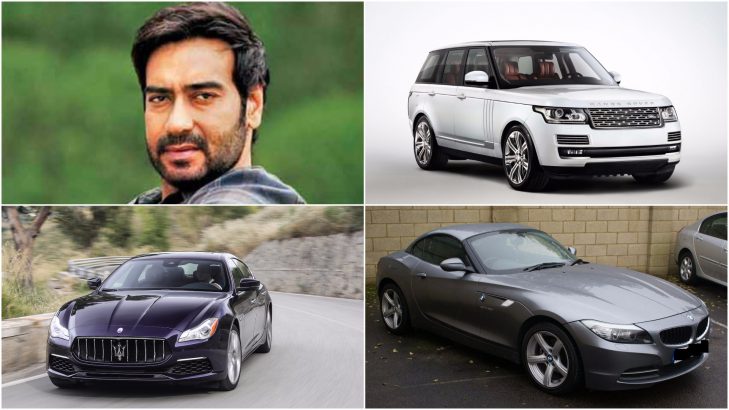 Another actor who simply goes crazy when it comes to super cool rides. He owns a modified Toyota Celica, BMW Z4, Maserati Quattroporte, Land Rover Vogue, a Ferrari, and many other cars. But the special one is the Vintage 1967 car used in his Bollywood flick, ‘Once Upon A Time In Mumbai’. 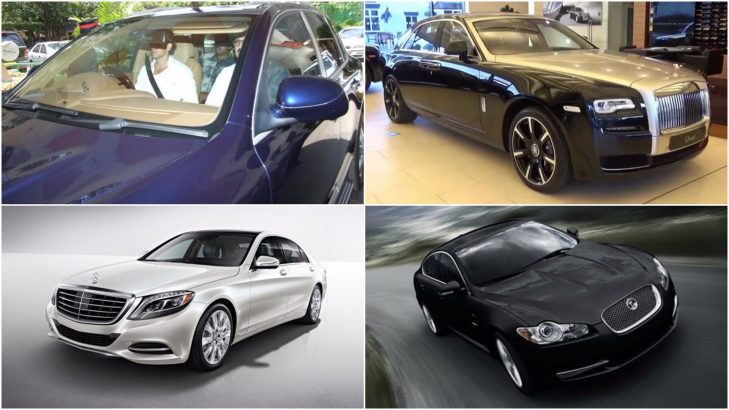 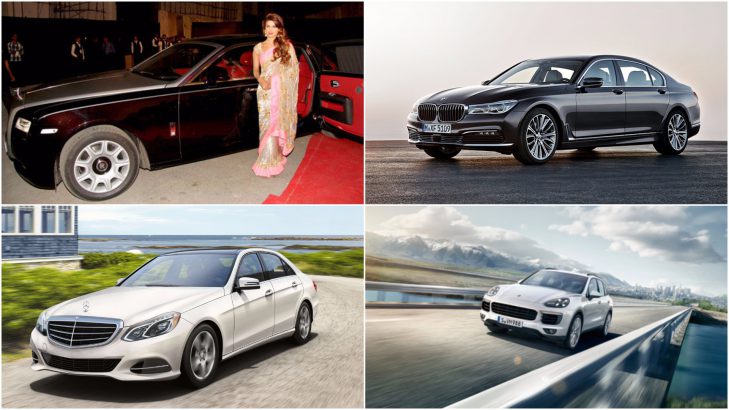 She is turning heads all around the world. Pairing up with Pitbull and working in Quantico, she has also made our heads turn around with her impressive fleet of cars. Songstress Piggy Chops is a proud owner of a custom made Rolls Royce. In addition, she also boasts having a Porsche Cayenne, Mercedes Benz E class and BMW 7 Series. 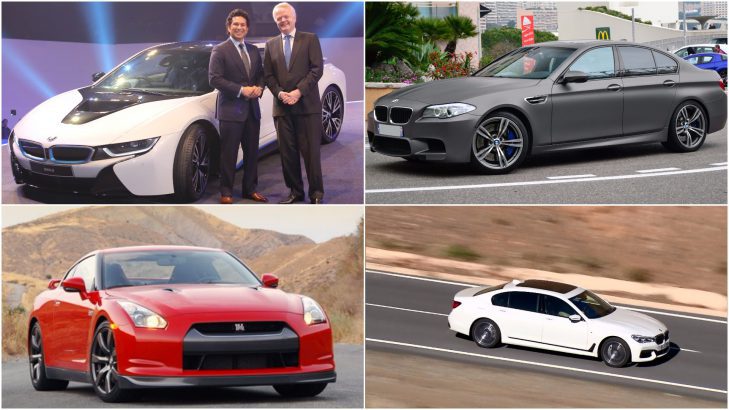 God of Cricket, World’s Highest Run Scorer, Little Master and so much more is also a car lover. His latest four wheeler is BMW 750Li M Sport which is customized to his taste. Also, his collection has BMW i8 Plug-in Hybrid Sportscar and BMW 7 Series. His matte grey BMW M5 is one of only 300 “30 Jahre M5” limited Edition to celebrate 30 years of the BMW M5. Also included in his collection are Nissan GT-R and the much talked Ferrari 360 Modena which was a gift from Fiat to the cricketer presented by the F1 legend Michael Schumacher. Furthermore, recently he himself presented BMWs to India’s Olympic medallists PV Sindhu, Sakshi Malik, Dipa Karmakar, and Coach Gopichand for their Rio 2016 Olympics feat. 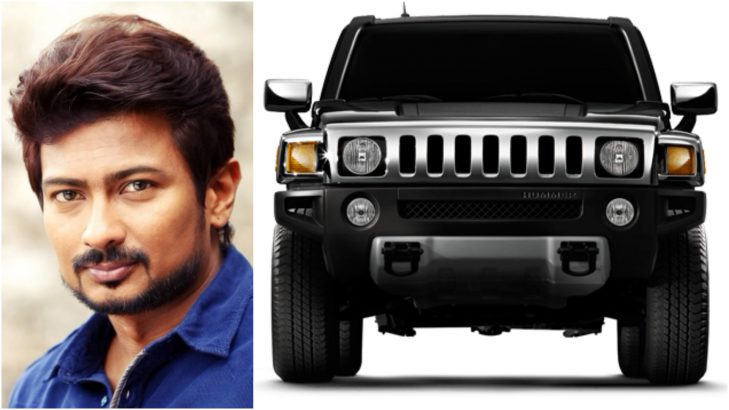 The famous Tamil actor, as well as producer, is ranked to be one of the few celebrities to own most expensive cars in South Indian Cinema industry. He is a proud owner of a tank car known as the Hummer. 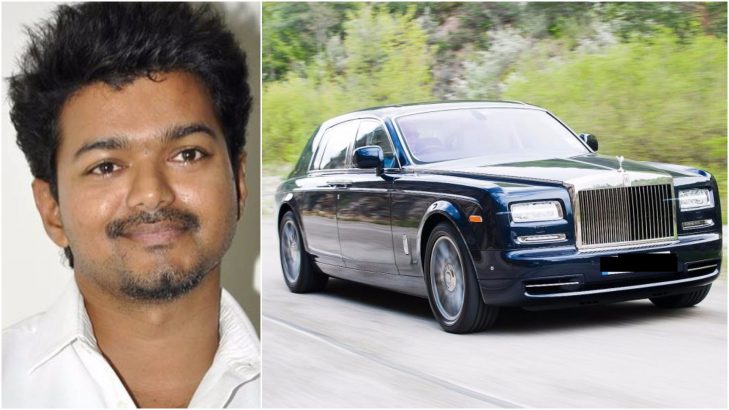 Another Tamil superstar he always had a fascination for cars and he is not that simple as he seems to be in his movies when it comes to his car choices. He loves to be a class apart as he has shown by owning Rolls Royce Phantom. 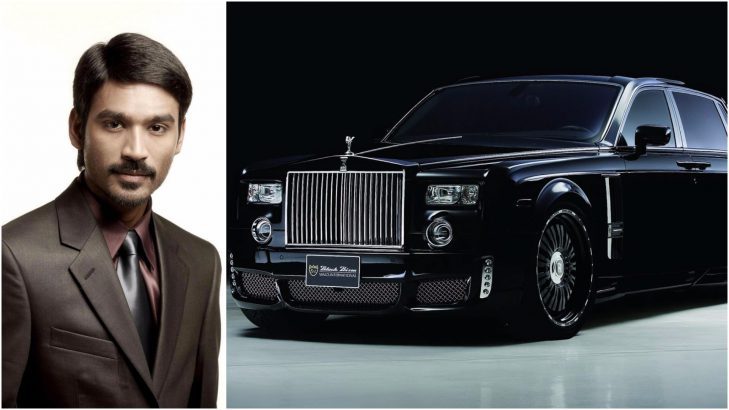 The “Kolavari Di” actor and the son-in-law of Rajnikant is an Audi lover. He is also a proud owner of a Bentley Continental Flying Spur, Rolls Royce Phantom and Jaguar . 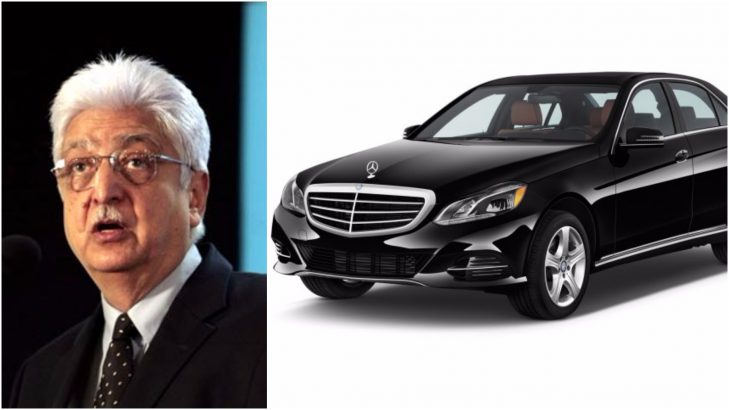 This man is known as the “CZAR of the Indian IT industry” lead Wipro for over four decades. He has pledged to give almost his 50% wealth to charity over a course of few years. He used to use to drive a simple Toyota car before buying a “used” Mercedes Benz S Class.

Although not a car enthusiast, but nonetheless an Indian worthy of making it to our list of Indian Tycoons/Celebs And Their Cars.

Which High-End Luxury Cars Do Top Bollywood Actresses Own?
wpDiscuz