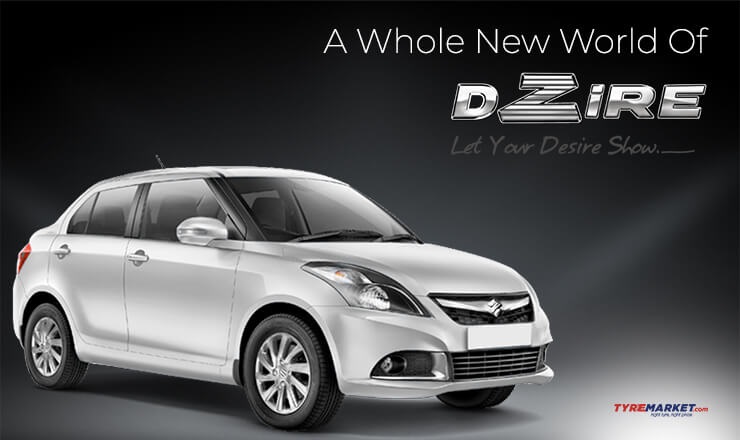 When we talk about compact sedans, the first name that comes to the Indian minds is none other than the Maruti Swift Dzire. The car has completed almost a decade of success and Maruti Suzuki has now launched the third generation of India’s best-selling under 4-metre sedan. Apart from the design and feature updates, there is another major change in the new model, the “Swift” moniker has now been detached and the 2017 model will be simply called Maruti Dzire. Impressive sales record of the car shows that the every second compact sedan sold in the country is a Maruti Dzire.

The  Maruti Dzire gets an all-new styling that looks completely different and fresh as compared to its predecessor. Besides that, new features have been added for more safety, fun and convenience. The new Dzire comes in seven petrol and seven diesel trims, making a total of fourteen variant options. The list also includes AMT (automatic manual transmission) variants in both petrol and diesel choices. On the whole, the  Maruti Dzire has got all that makes the ownership experience of India’s favourite sedan even better. So, let’s check out what it gets in its latest avatar. 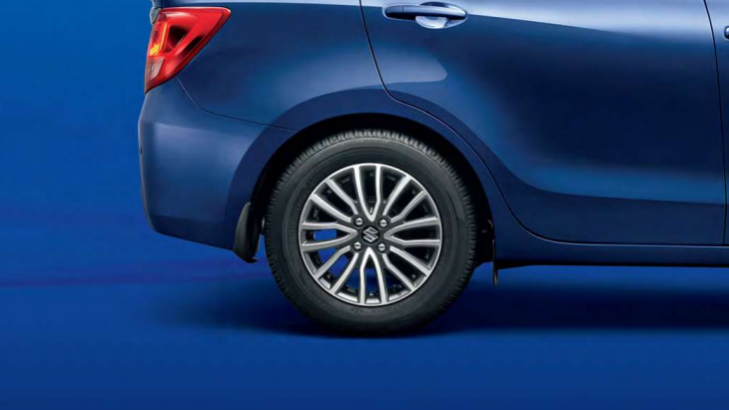 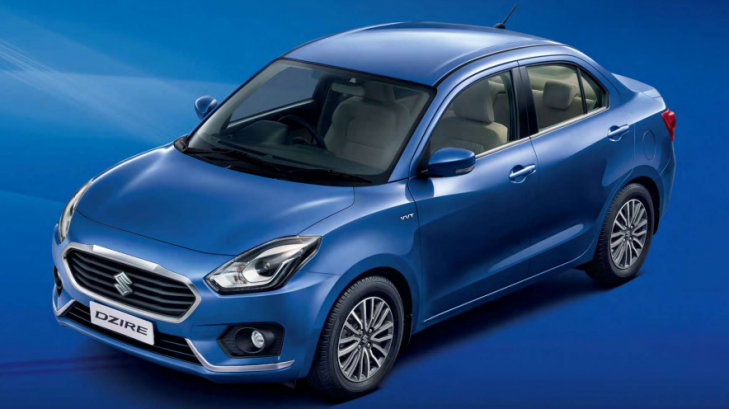 If we compare the Maruti Suzuki Dzire with its predecessor, it looks totally new and you will find hardly anything taken from the previous generation models. Like its revised name, the updated design gives a whole new identity to the car, which is now a true reflection of urbanity. The immaculate proportions of the sedan look elegant and are complemented by beautiful chrome highlights at the front and the rear. The new Dzire no more seems like a derivative of its hatchback sibling as the designs look more focused on sedan category, however, it will also be shared with the 2018 Maruti Swift hatchback model.

The front of the Dzire looks impressive with the new grill that gets chrome boundary and the fog lamps also receive chrome fins. LED Projector lamps with signature daytime running lights make it a bit aggressive from the front and make it distinguishable on the road. The neat and clean side profile shows off a rounded design theme that flows till the well-integrated boot, unlike the previous generation where a boot was just attached to the back. The 15-inch precision cut two-tone alloy wheels perfectly suits the overall design and comes as a nice highlight to the package. Turn indicators on mirrors, chrome door handles and a detailed chrome underlining to the windows enhances the premium feel of the car. 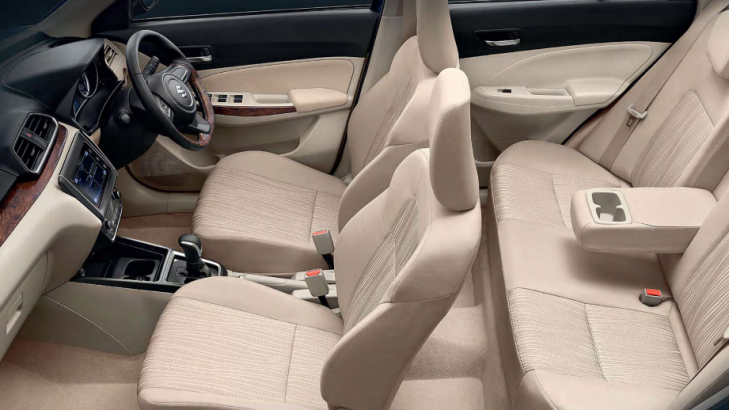 The 2017 Maruti Dzire has also been redesigned from inside as well to provide a new experience that reflects indulgence. According to the company, the new Dzire comes with more space, comfortable seats and plush interiors that offer a more joyful ride experience. The width has been increased by 40mm while the wheelbase gains 20mm extra to provide more space to the occupants. However, the colour combinations inside will definitely remind you of its predecessor as it acquires beige interiors with dashboard sporting a beige-black dual tone layout along with some wood trim in the middle.

The newly designed three-spoke steering wheel also gets some wooden styling, which comes leather-wrapped in the high-end ZXI and ZDI variants. Moreover, the steering mounted infotainment controls are also redesigned more ergonomically, while the voice-command and call switches are still behind the steering wheel. The new dashboard receives a driver-centric layout as the centre console is angled towards the person in the driving seat. The well-designed instrument cluster gets a white backlit for the analogue speedometer and tachometer setup on both the sides of a multifunction LCD screen that displays a decent amount of information.

Other features on the Maruti Dzire are automatic climate control, tilt steering, a smart-key with a push button starter, a height-adjustable driver’s seat, SmartPlay touch-screen infotainment system and much more, depending on the variant option. The car gets removable headrests and AC vent for the rear passengers as well along with an armrest with dual cup holders. The boot space also gets 60-litre extra pushing its total volume to 376-litres, much better than most of its competitors. 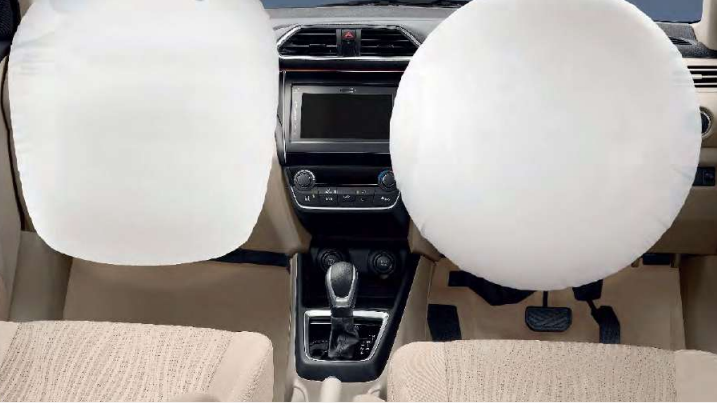 All the variants of the Maruti Dzire are built on the company’s new HEARTECT platform and get dual front airbags for better safety. Like most of the new Maruti cars, the new Dzire also gets safety kit as standard that includes ABS with EBD and ISOFIX child seat mounts. When it comes to the additional safety features, you can get rear parking sensors and camera, rear defogger, speed sensitive auto door locks and much more, depending on the variant. 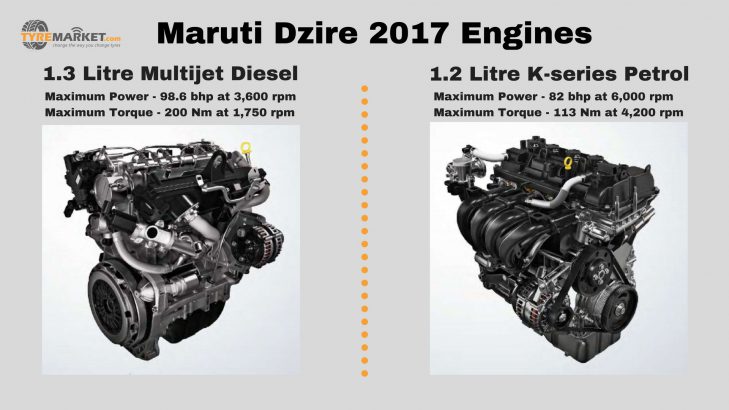 The Maruti Suzuki Dzire is available with two engine options, a 1.2-litre, four-cylinder petrol engine and a 1.3-litre Multijet diesel motor. The gasoline powered mill produces 82 bhp of power at 6,000 rpm and delivers a peak torque of 113 Nm at 4,200 rpm. On the other hand, the diesel burner makes 98.6 bhp at 3,600 rpm along with an impressive torque of 200 Nm coming at just 1,750 rpm. Both the motors are available with the 5-speed manual transmission in the LXI and LDI trims, while the upper variants also have an option to go with the 5-speed automatic manual transmission setup with both the engine alternatives. 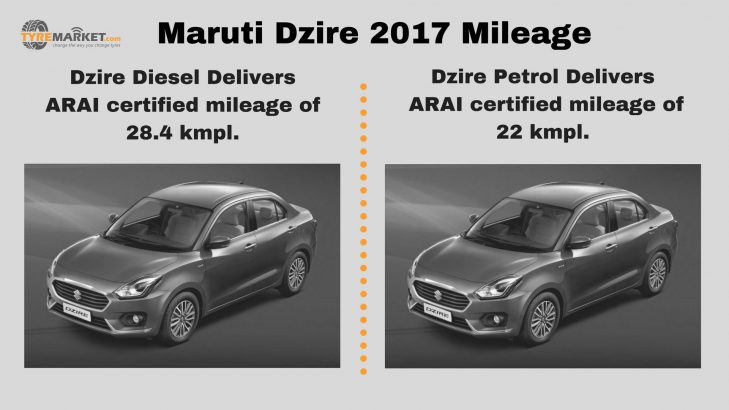 Both, 1.2 petrol and the 1.3 diesel engines of the 2018 Maruti Dzire have been tuned to deliver best in class mileage. The petrol trims of the new Dzire have been claimed to return 22 kmpl while the diesel options have an outstanding ARAI certified fuel efficiency of 28.4 kmpl. There is not any variation in the economy of manual and automatic transmission models as both the transmissions provide similar efficiency. 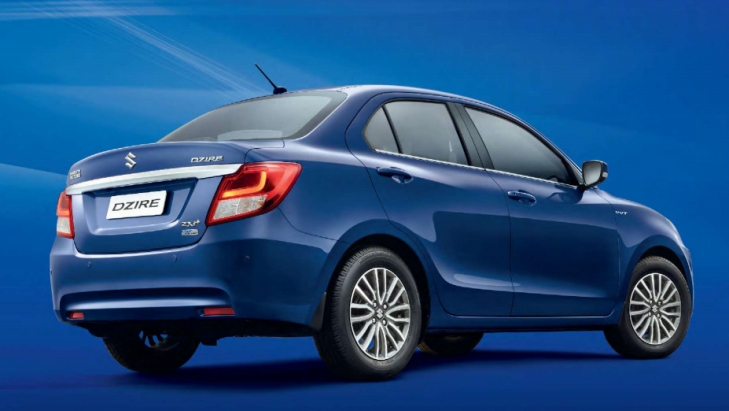 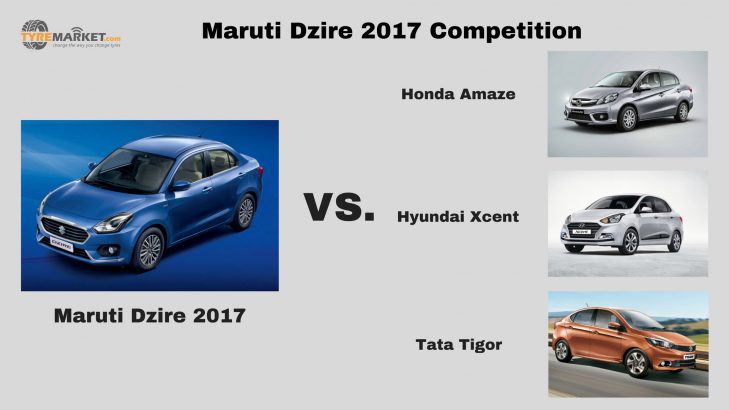 Though Maruti Suzuki Dzire is already a market leader in the compact sedan segment, there are a few competitors giving a decent fight. The list of the Suzuki Dzire opponents includes Honda Amaze and the Hyundai Xcent, while its latest rival is the Tata Tigor.

I have read so many articles or reviews concerning the blogger lovers
except this post is in fact a fastidious paragraph, keep it up.