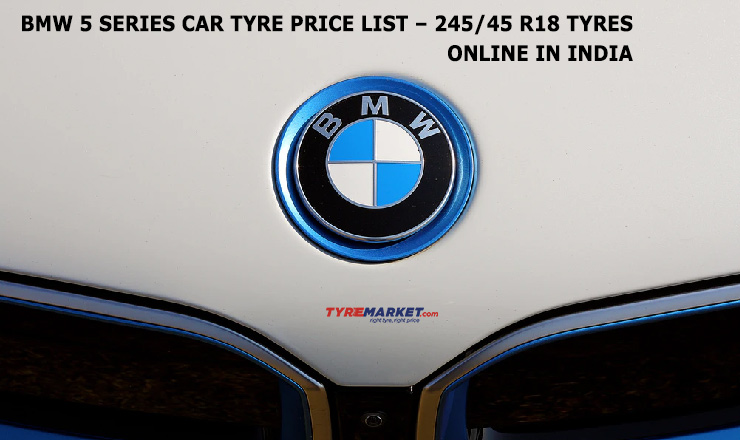 Recommended Tyres for  BMW 5 Series  (Check Price List & BMW 5 Series Tyres Size) – What are the best tyre brands along with the correct sizes for your BMW 5 Series? Read ahead to know more.

BMW’s 5 Series sedan has long been hailed as the ultimate performance saloon of this decade. The 5 series sedan was refreshed in 2013; the same year saw German automaker consciously dropping the petrol variant in its lineup only to reintroduce it three years later in 2016. This time around, however, the car was offered in the entry-level 520i variant. Car buyers’ interest and demand for cheaper variants of premium sedan models can be credited for this change in approach by the German car maker. The ongoing BMW 5 Series sedan is in its seventh generation. As claimed by the company, its latest offering is not only more refined in terms of performance, but is also substantially more frugal than its predecessor model.

The BMW 5 series is offered in four variants which comprise of 520i Sportline, 530d M Sport, 520d Sportline and 520d Luxury Line. The petrol variant of the BMW 5 Series, the 520i runs on 245/45 R 18 radial tubeless tyres and are wrapped with 10-spoke, diamond cut alloys wheels. Similar size of tyres are offered across the remaining three variants too.

With the sevent generation of the BMW 5 Series tweaks like more enhanced front and rear end, as well as the upgraded power plants, were incorporated into the new models, making 5 series the ultimate performance machine. Mercedes Benz E Class, Jaguar XF, Audi A6 and Volvo S90 are the sedans with which the BMW 5 Series lock its horns in the segment.

On the outer side, the BMW 5 series gets a large grille, sculpted bonnet and noticeable use of chrome accents across the exterior including the fog lamp encasings. At the rear, the aesthetic highlight comes in form of the matte finished twin exhaust pipes. BMW 5 series manages to offer one of the most user-friendly interiors that has ever been seen in a luxury sedan. There is a new instrument cluster that gets both analogs as well as digital dials. The analog dial also showcases the attention to detail BMW has given to the new 5 Series. The 5 Series also gets BMW’s iDrive system which now comes with 18.5 cm display and a large controller located in the central tunnel. There are also LCD screens which have been integrated into the rear of the driver and co-passenger headrest to take on the entertainment duties for the rear passengers on the go. Some more top of the line features include BMW display key, remote control parking, parking assistant, BMW head-up display, rear seat entertainment system, telephony with wireless charging, Harman Kardon music system and others.

Refer to the below-mentioned table to find out the tyre size of your BMW 5 Series’ variant:

Below is the list of most recommended tyres for all the variants of BMW 5 Series:

CLICK HERE TO VIEW OTHER BEST AVAILABLE TYRE OPTIONS FOR BMW 5 SERIES
*The above-mentioned tyre brands and variants are recommended on the basis of inquiries received on Tyremarket.com. Prices as on 25th July, 2018.